About Solar and Battery Storage Systems

What We Heard & What We Did

The Project would consist of a solar field with arrays of photovoltaic panels that would be arranged in rows on single-axis tracking foundations. The solar array would charge the battery storage during the day to provide electricity whenever it is needed most, day or night.

Other equipment on site would include combiners, inverters, transformer(s), buried conduits, and onsite collection lines.

The proposed interconnection route would consist of an overhead transmission line that would extend from the Project switchyard approximately 0.5-mile south to connect into the Maui Electric Company grid at the Auwahi 69 kV substation.

The solar field and associated infrastructure would occupy approximately 200-acres. 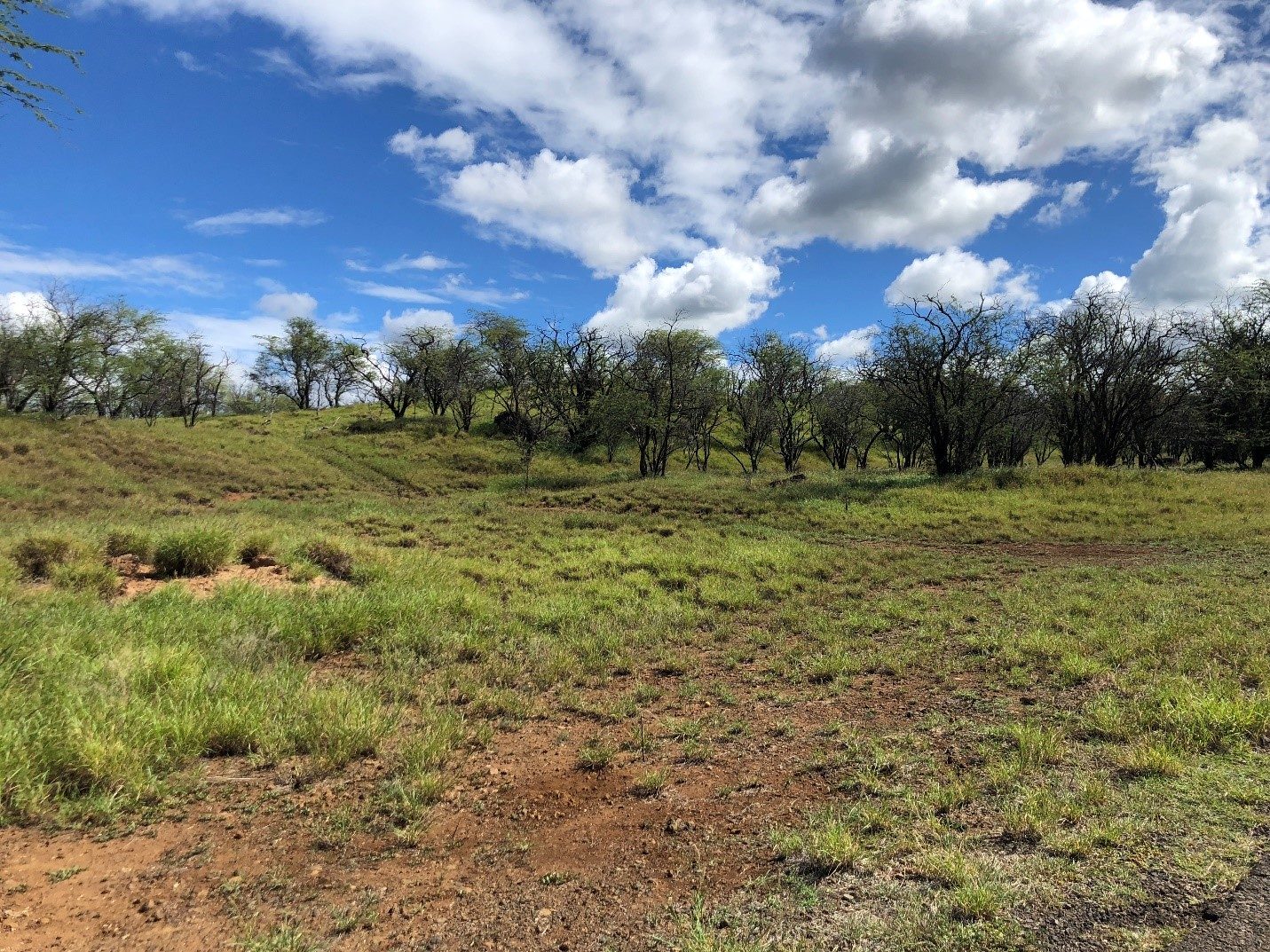 About Solar and Battery Storage Systems

The sun is a highly stable and predictable resource, which makes solar technology correspondingly reliable and easy to use. The sun’s energy is converted directly into electricity by a photovoltaic (PV) solar panel, named after the “photovoltaic” phenomenon, where light energy, in the form of photons, can be converted to electricity using certain materials that naturally generate a flow of electrons when exposed to light. As this process requires no fuel, it creates no emissions during operations. As a result, solar energy is one of the cleanest, most reliable forms of energy around.

The effectiveness of a solar energy system depends on a number of factors: the number of hours of sunshine, the season, weather conditions, albedo (the reflecting power of the surrounding surface), etc. Solar panels are always tilted and oriented to capture the maximum amount of light.

Battery storage works by storing the energy produced by solar panels during the day. The higher your battery’s capacity, the more solar energy it can store. The energy in the battery storage can be used whenever it is needed most, day or night.

At the end of its operational life, the equipment will be recycled and the land the project occupies would be returned to its original state.

More information on solar energy is available at Innergex, the Solar Energy Industries Association, and the International Energy Agency. 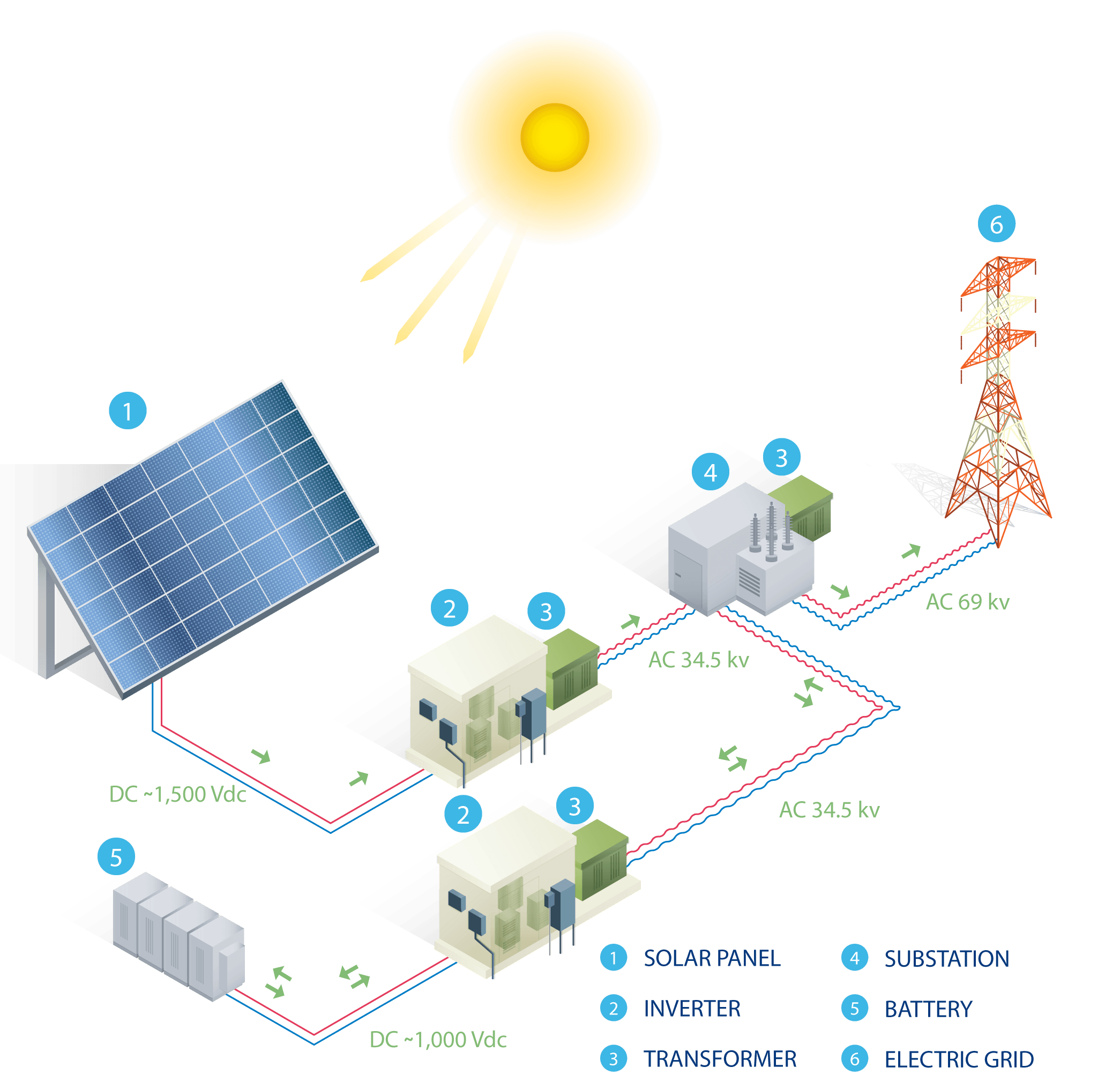 Our passion to produce renewable energy stems from our profound belief that we can all make a difference in making the world a better place for future generations. At Innergex, environmental sustainability is a key part of our development strategy. We are driven by the belief that what we do matters as much as how we do it by developing projects that avoid, minimize, mitigate or offset for the impacts on the surrounding area.

Innergex takes its environmental responsibilities very seriously and our facilities are developed and operated with strict adherence to environmental codes and best practices. Renewable energy projects are subject to County, State and Federal regulations.  During early stage development, we conducted a preliminary archaeological desktop and reconnaissance field survey at the Project area. A Critical Issues Analysis was also completed which describes the existing environmental resources at the Project area and identifies regulatory requirements, issues, constraints, and limitations as they relate to the Project. We used these preliminary results to site the proposed Project in a location that minimizes environmental impacts.

Detailed archaeological, cultural, environmental and technical surveys and studies are required to assess potential Project impacts, required avoidance and minimization measures, design limitations, and to refine required permitting criteria.  The results of the detailed surveys and studies will help identify any constraints as they relate to the Project and arrive at the best possible design of the Project that balances archaeological, cultural, environmental, social, technical, and economic considerations.  We will then continue to seek applicable government permits and approvals based on the revised Project design and community input and feedback.

Initial drafts of the Archaeological Inventory Survey, Biological Resources and Delineation of Wetlands and Other Waters of the U.S. reports detailing the base line conditions are available in the Documents section below.

Conducting these detailed surveys and studies are crucial to the understanding of a site. Furthermore, early stage meetings with key stakeholders who have information and an interest in the Project area have already started, as well as public meetings to gather feedback on the proposed project. Community engagement efforts will continue throughout the development of the proposed Project.

We invite you to our next Open House for an update on the Project.  We hope you will join us as we share some of the preliminary results that were conducted over the past year.  We welcome your feedback.

Innergex’s philosophy has always been to develop and operate reliable, high-quality projects while respecting the environment and balancing the best interests of communities and partners. Thus, when developing a solar project, Innergex believes in generating local benefits that go beyond economic benefits such as job opportunities.

Construction and operation phases will create benefits in terms of new employment opportunities, as well as the use of local resources. Preference would be given to retaining local persons, consultants, businesses and contractors throughout the development of the project.

Innergex believes that communities must benefit from a renewable energy project in their area and as such we have a long history of sponsoring and supporting local associations, legacy projects and community events in the communities where we operate.

Thank you for attending and participating in the Maui Meadows community meeting held on October 19, 2018, and the public open house held on October 30, 2018, at the Kihei Community Recreation Centre and /or community engagement meetings. To have a look at the presentation and poster material, click here. The collated feedback received during the November 1 – 30, 2018 comment period can be found in the Consultation Report.

Thank you for attending and participating in the public information sessions held on June 3, 4 and 5, 2019, at MRTC. To have a look at the presentation and poster material, click here.

The Public Utilities Commission (PUC) held a two-day evidentiary hearing on the Paeahu Solar Project on December 4 and 5, 2019 with all parties represented.  Both Maui Electric and Paeahu Solar presented compelling information during the hearing.  As importantly, we were pleased that written testimonies in support of the project, including several from Maui Meadows residents, were submitted to the PUC in advance of the hearing.  The documents related to the PUC proceeding can be found on the PUC website using Docket No. 2018-0433.  We are awaiting a ruling from the PUC.

Geotechnical testing and analysis to support our continued assessment and design of the Paeahu Solar Project will be conducted from February 3 – 17, 2020 on Ulupalakua Ranch. This activity will consist of drilling and sampling 25 boreholes and 6 test pits in the study area. Large equipment (truck mounted drill and backhoe) will go to the study area through Ulupalakua Ranch routes and not through the Maui Meadows neighborhood. Because the activity will generate noise, notices were mailed to Maui Meadows residents prior to the commencement of the testing to keep them informed.

For additional information refer to Frequently Asked Questions and What We Heard & What We Did and Documents sections below.

Community engagement is ongoing throughout the entire process.

What is the Paeahu Solar Project?

Innergex is proposing a 15 MW solar photovoltaic and 60 MWh battery energy storage system project on Ulupalakua Ranch, mauka of Piilani Highway in South Maui, under a land lease agreement. The project will be located on approximately 200 acres of Ranch land.

What led to this project being developed?

Innergex responded to a Request for Proposal (RFP) issued by Maui Electric Company, Ltd (“Maui Electric”) in 2018 for renewable energy that will help stabilize and lower costs while reducing the state’s reliance on imported fossil fuel and cutting greenhouse gas emissions.

Why are batteries part of this project?

The battery storage system was a key aspect of the RFP. The batteries would be completely charged from the solar panels during the day. The energy can then be used during peak demand in the evening or at other times when the sun is not shining.

Why was Ulupalakua Ranch selected as the location for this project?

Ulupalakua Ranch was selected because it has an excellent solar resource, buildable land, existing Maui Electric infrastructure (i.e. substation and transmission line), and Ulupalakua Ranch’s interest in creating sustainable, diversified uses of the less productive areas of their land. In addition, Maui Electric identified the need for regional electricity generation in South Maui due to load growth and constrained transmission capability.

What will the Project accomplish?

The Paeahu Solar Project will power approximately 6,900 homes with renewable energy. This will contribute to the State of Hawaii’s goal to be100% renewable by 2045 and reduce the state’s dependency on imported fossil fuel. The project capitalizes on an abundant solar resource which is the least expensive form of renewable energy available in Hawaii today.

Will this mean increased costs for consumers?

Maui has some of the highest electricity prices in the United States at 35 cents per kWh. The price of solar plus battery energy storage in the Maui Electric RFP is the lowest to date for renewable electricity in the state. The Project will provide a fixed, long-term price of 11.7 cents per kWh, in place of the volatile prices of fossil fuels. This is more than 20% lower than Maui Electric’s current cost of generating electricity which will put downward pressure on electricity rates.

How else will the community benefit from the Paeahu Solar Project?

Who is funding the Paeahu Solar Project?

Are there any cultural or environmental features to consider for the site?

What is the timeline for the Project?

Innergex responded to Maui Electric’s Request for Proposal in April 2018 and, after meeting other milestones, was awarded a Power Purchase Agreement in December 2018. Innergex anticipates completing construction and beginning operation of the project by June 2022.

How long will Paeahu be in operation?

The Project’s power purchase agreement (PPA) with Maui Electric has a term of 25 years. Thereafter, the project can be purchased by Maui Electric, have its PPA renewed, or be decommissioned (equipment recycled). Innergex is responsible for decommissioning and restoring the site to its original state.

See the 2019 Openhouse Posterboards for details and background information.

Roadways and Traffic through Maui Meadows

At present, Paeahu Solar anticipates that upon completion of construction and during normal operations of the Project there will be only one security light in use for the entire Project.  The Project is expected to include a security fence with a gate.  A security light will be installed at the gate.  Depending on the location along the fence line, the light will be at least 250 feet away from the nearest residence.

The light will have a motion sensor which will activate for the safety of authorized personnel, in those rare circumstances, that they may need to access the site at night. In addition, light from the security light will be shielded and/or directed downward.  Thus, even assuming light from the security light can be seen from Maui Meadows residential development, it is not expected to have a significant impact on recreational stargazing or other similar activities by nearby residences.  Apart from this one security light, no other security lights, or any other types of lights or lighting, will be used after completion and during regular operation of the Project.

To download initial Delineation Wetlands and Other Waters of the U.S. Report

Get to Know Innergex and our Paeahu Solar Project by downloading the stories:

Application for Approval of Power Purchase Agreement for Renewable Dispatchable Generation can be searched on the Hawaii Public Utilities Commission Document Management System under Docket No. 2018-0433.

Summary points from the Maui Electric Company Application (noted above):

We know that successful renewable energy projects are developed with the input and support of local communities. We look forward to hearing your thoughts, comments, and suggestions on these projects.