About Solar and Energy Storage Systems

Click here to register or email us at kahanasolar@innergex.com and a registration link and event details will be emailed to you. 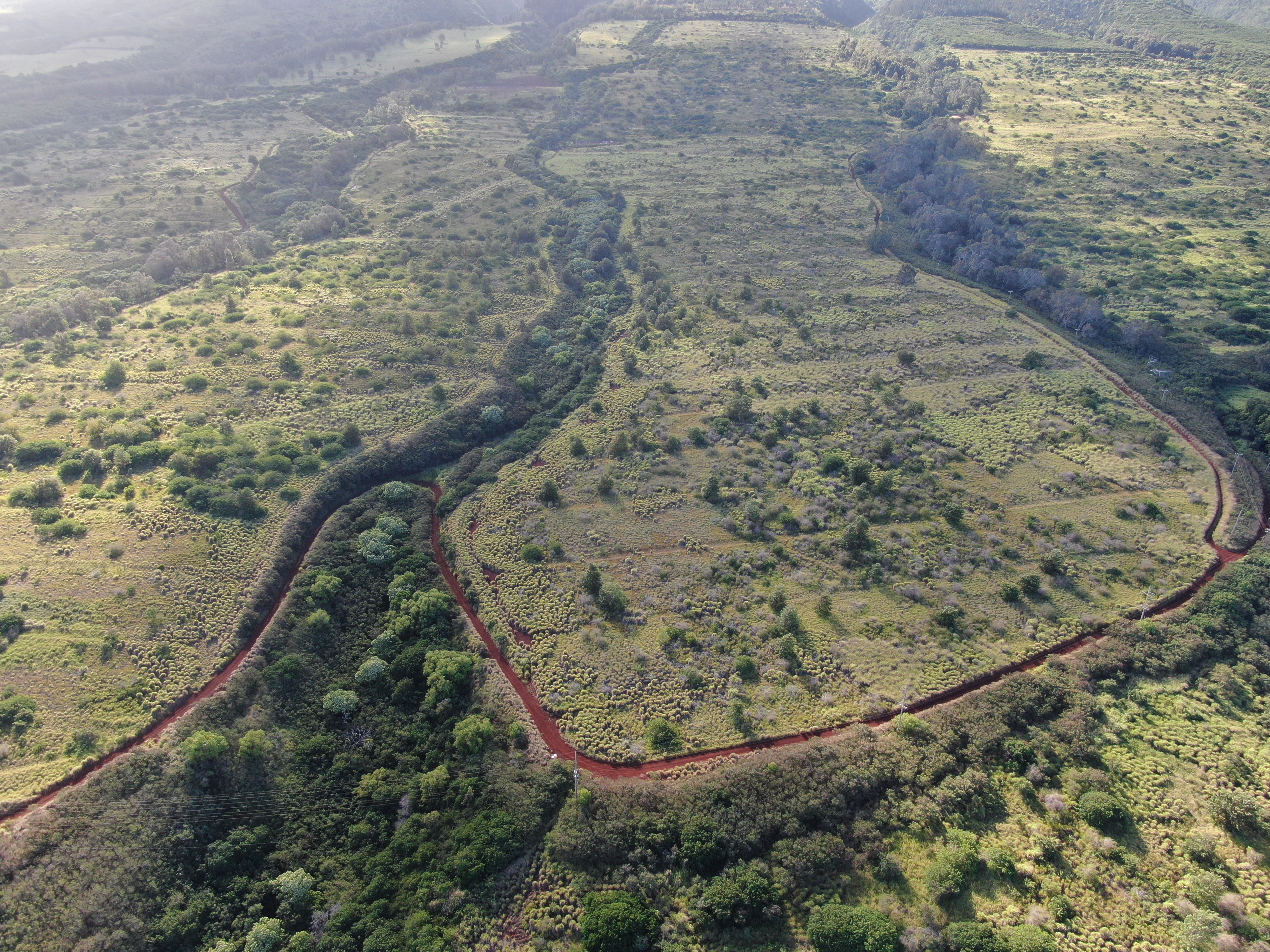 Our passion to produce renewable energy stems from our profound belief that we can all make a difference in making the world a better place for future generations. At Innergex, environmental sustainability is a key part of our development strategy. We are driven by the belief that what we do matters as much as how we do it by developing projects that avoid, minimize, mitigate or offset for the impacts on the surrounding area.

Innergex takes its environmental responsibilities very seriously, and our facilities are developed and operated with strict adherence to environmental codes and best practices. Renewable energy projects are subject to County, State and Federal regulations.

The Preliminary EA identifies areas in which further study is required and will form the basis of our environmental program going forward. These studies will include general and detailed plant and wildlife surveys, wetland and waterways assessments, archaeological and cultural impact assessments, visual impact and glare analyses, and traffic and noise studies.

For the regulatory and permitting processes, independent third-party qualified professionals will conduct these studies and prepare the reports that will be submitted for regulatory review and approval. Once available, the results will be shared with the community at future public meetings.

Based on the existing information available, the following permits will likely be required to construct and operate the Project. Through engagement with regulatory agencies and officials and various studies and analyses, the list will be refined as needed.

Although Innergex will design the Project to minimize impacts to Water of the U.S. (i.e. jurisdictional waters under the U.S. Army Corp of Engineers), if impacts are unavoidable, then the following permits may also be required: 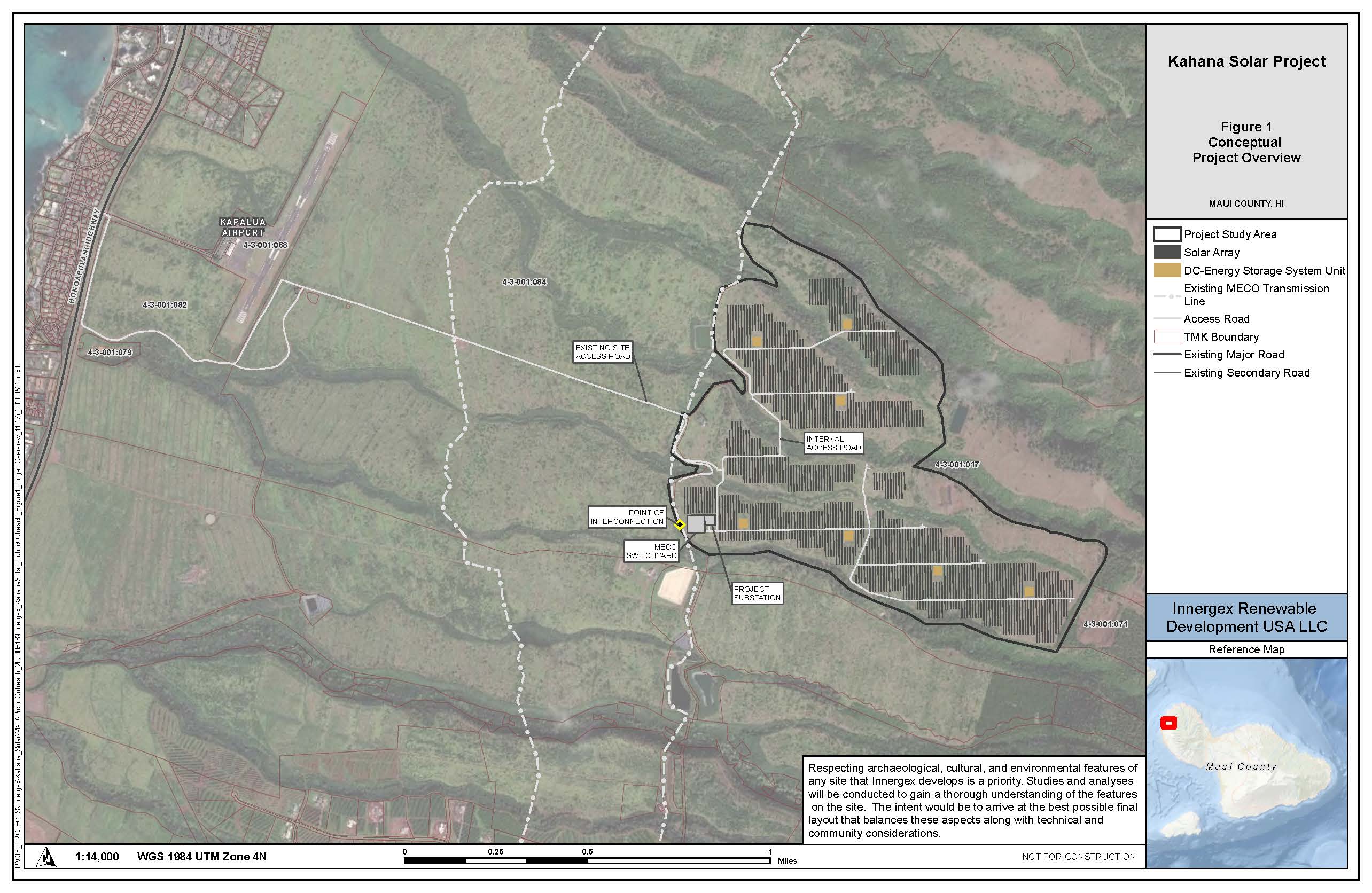 Innergex’s philosophy has always been to develop and operate reliable, high-quality projects while respecting the environment and balancing the best interests of communities and partners.

Construction and operation phases will create benefits in terms of new employment opportunities, as well as the use of local suppliers. Preference would be given to retaining local persons, consultants, businesses and contractors throughout the development of the project.

Innergex believes that communities must benefit from a renewable energy project in their area, and as such we have a long history of sponsoring and supporting local associations, legacy projects and community events in the communities where we operate.

Innergex is committed to applying its expertise, resources, and dedication to the good of the planet in actively addressing Maui’s unique challenges.

The Kahana Solar Project will contribute to Maui’s renewable energy goals as called out in the Maui Island Plan and potentially offer benefits listed below:

The Hawaiian Electric Companies launched a request for proposals for clean, renewable energy projects for Oahu, Maui and Hawai`i Island that would help the state meet its goal of 100% renewable energy by 2045 to bring more stable electricity costs to consumers and reduce its dependency on imported sources of energy.

In 2019, Hawaiian Electric launched the second phase of their renewable energy procurement process, the single largest procurement effort undertaken by a U.S. utility, for approximately 900 MW of new renewable generation.

Community engagement is ongoing throughout the entire process.

About Solar and Energy Storage Systems

The sun is a highly stable and predictable resource, which makes solar technology correspondingly reliable and easy to use. The sun’s energy is converted directly into electricity by a photovoltaic (PV) solar panel, named after the “photovoltaic” phenomenon, where light energy, in the form of photons, can be converted to electricity using certain materials that naturally generate a flow of electrons when exposed to light. As this process requires no fuel, it creates no emissions during operations. As a result, solar energy is one of the cleanest, most reliable forms of energy around.

The effectiveness of a solar energy system depends on a number of factors: the number of hours of sunshine, the season, weather conditions, albedo (the reflecting power of the surrounding surface), etc. Solar panels are always tilted and oriented to capture the maximum amount of light.

Battery storage works by storing the energy produced by solar panels during the day. The higher your battery’s capacity, the more solar energy it can store. The energy in the battery storage can be used whenever it is needed most, day or night.

At the end of its operational life, the equipment will be recycled and the land the project occupies would be returned to its original state.

More information on solar energy is available at Innergex, the Solar Energy Industries Association, and the International Energy Agency. 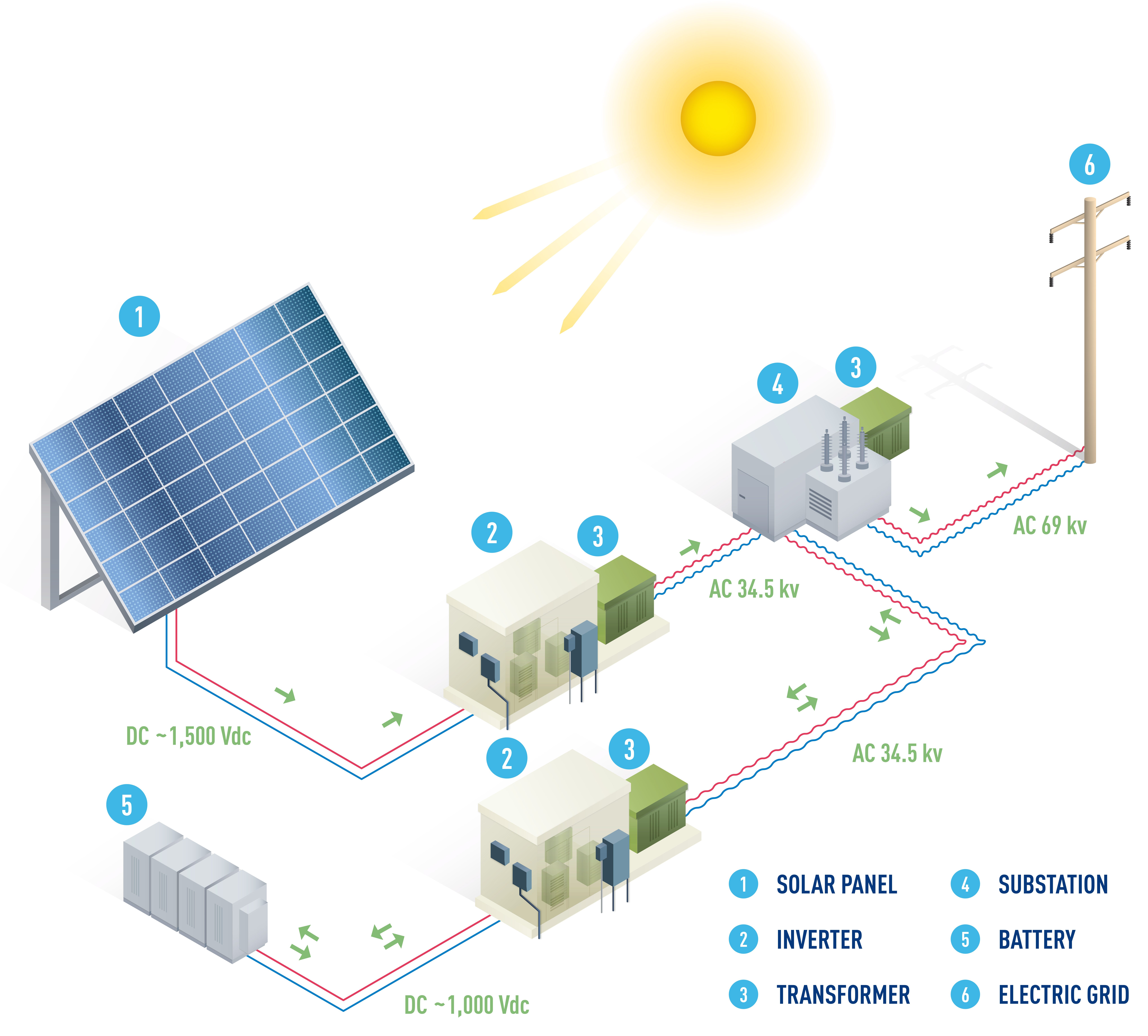 What is the Kahana Solar Project?

Why is this suitable land for a renewable energy project?

The Kahana Solar Project site is located 1.4 miles mauka from the Kapalua Airport and the nearest residential community. The site is adjacent to existing transmission infrastructure and in an area with an excellent solar resource. The Project would temporarily utilize agricultural land, which has not sustained active activities since 2009; therefore, the installation of a solar project would not displace existing agricultural production.

What led to this project being developed?

Innergex responded to a competitive Request for Proposal (RFP) issued by Maui Electric in 2019 for renewable energy that will help stabilize and lower costs while reducing the state’s reliance on imported fossil fuels and cutting greenhouse gas emissions.

For 30 years, Innergex has believed in a world where abundant renewable energy promotes healthier communities and creates shared prosperity. As an independent renewable power producer which develops, acquires, owns and operates hydroelectric facilities, wind farms and solar farms, Innergex is convinced that generating power from renewable sources will lead the way to a better world. Innergex conducts operations in Canada, the United States, France and Chile.

Who is funding the Kahana Solar Project?

Will this mean increased costs for consumers?

Maui has some of the highest electricity prices in the United States at 35 cents per kWh. The price of solar plus battery energy storage in the recent Maui Electric RFPs is the lowest to date for renewable electricity in the state. The Project will provide a fixed, long-term price for 25-years, in place of volatile prices of fossil fuels, which will put downward pressure on electricity rates.

What will the Project accomplish?

The proposed Project will power approximately 11,600 homes with renewable energy. This would contribute to the State of Hawaii’s goal to be 100% renewable by 2045 and reduce the state’s dependency on imported fossil fuel.

How else will the community benefit from the proposed project?

Innergex will give preference to qualified local suppliers and contractors throughout the development of the project. During operations, the project’s community benefits package will be dedicated funding to the Pu’u Kukui Watershed Preserve to support its impressive conservation initiatives. Innergex will also provide an annual grant to non-profits to support energy efficiency measures and will support the cultural resource activities of the Aha Moku O Ka’anapali. Our community contributions will also include memberships and sponsorships of various organizations and events.

Why is energy storage part of this proposed project?

The DC-coupled battery energy storage system (DC-ESS) is a key aspect of the RFP.  The DC-ESS would be completely charged from the solar panels during the day. The energy can then be used during peak demand in the evening or at other times when the sun is not shining.

Are there any cultural or environmental features to consider for the site?

Respecting archaeological, cultural, and environmental features of any site that Innergex develops is a priority. These studies and analyses will be conducted to gain a thorough understanding of the site and any findings. The intent would be to arrive at the best possible final layout that balances archaeological, cultural, environmental, technical, economic, and community considerations.

What is the overall impact of solar projects on the environment?

Innergex must provide a complete analysis of the greenhouse gas emissions (GHG) created throughout the life cycle of the project as part of the Maui Electric Power Purchase Agreement (PPA) and Public Utilities Commission approval process. A recent and similar sized project analysis resulted in a comparison that showed a similarly sized solar project would eliminate 94% of the lifecycle and operational GHG emissions that would have been produced by the normal generation mix.

What is the timeline for the proposed project?

Innergex responded to Maui Electric’s RFP and was selected to start PPA negotiations in May 2020. The initial term under the PPA is 25 years. Thereafter, the project can be acquired by Maui Electric, have its PPA renewed, or be decommissioned, recycled and site restored to its original state. Innergex anticipates completing construction and beginning operation of the project by the end of 2023.

How will the project be decommissioned?

As part of the decommissioning of a typical solar project after its useful lifecycle (between 25-35 years), any and all components associated with the project would be removed and the area would be restored to meet the natural environment surrounding it. Decommissioning criteria include consideration of local environmental factors to minimize effects such as erosion during the removal process, and the recycling of all possible materials demolished or removed from the site.

Reuse or recycling of materials would be prioritized over disposal. Recycling is an area of great focus in the solar industry, and programs for both batteries and solar panels are advancing every year. Panels and batteries would most likely be shipped to recycling facilities on the mainland.

If any materials need replacing before the facility end-of-life, Innergex would seek the most environmentally responsible route for reuse, recycling or disposal

To download the Visual Simulations of the Conceptual Project Layout

We know that successful renewable energy projects are developed with the input and support of local communities. We look forward to hearing your thoughts, comments, and suggestions on this project.